How Much Meat to Expect from a Farm-Direct Beef

Consumers and beef producers are taking advantage in ever-growing numbers of local food systems, and this includes purchasing or raising beef to have processed locally. Many are often surprised by the amount of packaged beef that they receive and struggle with how to plan their freezer space. This may often be a point of contention and misunderstanding between consumers, beef producers, and beef processors. The following will help you determine how much meat to expect from a beef animal.

It is important to understand that a 1,200-pound beef animal does not yield 1,200 pounds of beef in the freezer. As beef is processed, the removal of skin, fat, bone, and organs drastically reduces the final weight. Moisture loss due to evaporation throughout processing also impacts the final amount of take-home beef. With every cut made to the carcass, the final take-home beef weight decreases.

The following formula is used to calculate the dressing percentage:

Although there is a standard formula to calculate dressing percentage across animal types, it is important to note that some processors weigh animals on the farm before shipping (allowing time for the digestive tract to empty), and some weigh animals right before harvest. Dressing percentage does not give a precise amount of beef for the freezer; it is just the first step of many where weight is lost.

Carcass Chill
Hot carcass weight is called such because it is the weight directly from the processing floor. The next important step in the process is to chill the carcass. Chilling affects carcass weight because moisture is lost from water evaporation. A carcass is approximately 70 to 75 percent water. This moisture is lost in the cooling process, and this loss is not accounted for in the dressing percent. As the carcass is cooled, water evaporates from the carcass, causing losses of 2 to 5 percent of the hot carcass weight. This occurs over a 24-hour period and is called cooler shrink.

Aging
Aging is simply the process of holding whole beef carcasses or wholesale cuts at refrigerated temperatures to allow for improved tenderness and flavor through natural processes. Beef can be aged for 4 to 5 weeks to improve tenderness, but aging time often depends on the processor’s cooler space. The method and length of aging will vary from processor to processor. When the carcass is dry-aged (not vacuum packaged), some weight will be lost during the process from further water evaporation, and some dried edges will need to be trimmed during the process. Beef that is aged for longer periods of time will weigh less.

Primal Cuts
After the carcass is chilled and aged, it will be further processed into cuts. First, the carcass will be split into sides (also called halves). A side is half of a dressed carcass split from nose to tail. Each half will be split into quarters. Consumers often do not want to purchase a whole animal on their own and may half or quarter them with others. From this point, the quarters are then fabricated to primals. The round, loin, rib, and chuck are the major primal cuts. The front quarter gives the rib chuck, brisket, and plate. The hindquarter gives the flank, round, sirloin, and loin. These primal cuts are further divided into subprimal cuts.

One of the biggest benefits of having a beef animal butchered is the flexibility in determining desired cuts. Tables 1 and 2 illustrate the cut options for each of the primal and subprimal cuts.

Cut Choices
Perhaps the most daunting task of having an animal custom processed is choosing which cuts of beef to take home. Custom fabrication is one of the highlights of processing beef locally. This section describes the choices available for each of the primal cuts.Figure 1 describes each primal and the retail cuts found in each section of the carcass.

Brisket
The brisket can be left whole or divided into the leaner brisket flat and the brisket point, which is fattier. Customers choosing not to keep the brisket whole generally opt for it to be included in ground beef.

Shank
Popular options for the shanks include ground beef or stew meat. However, it can be cut into cross sections, known as the shank crosscut, to be made into dishes like osso buco.

Rib
Some of the most flavorful and tender cuts of beef come from the rib. There are two subprimals from the rib and many options within each.

Plate
The plate primal is located directly under the rib. Sometimes this section is used to yield stew meat and ground beef, but there are other choices. Inside and outside skirt steaks are perfect for fajitas. Hanger steaks and plate short ribs are other popular options from this primal.

Loin
The loin primal has some of the most tender and popular cuts. It is important to note that choosing one option will mean you cannot choose another. The subprimals are tenderloin, strip loin, and short loin.


Sirloin
The sirloin is broken into two subprimals, bottom sirloin butt and top sirloin butt.
Flank
Flank steak is the only major option for the flank. It is excellent for fajitas or stir-fries.

Round
The heaviest wholesale cut of the carcass is the round. It makes up the rump and hind leg muscles, which are used for movement and are leaner and less tender. The round can make flavorful roasts, steaks that could be tenderized for country fried steak or cube steak, or ground beef. There are four subprimals in the round.


Factors Affecting Yields of Retail Cuts
The amount of final packaged meat depends on factors such as fat, bone, aging, and muscularity of the carcass. Carcass fat has the greatest impact on the amount of product from the carcass. The more external fat an animal has, the more trim will be lost. Thus, not only does over-finishing lead to increased feed costs, but it will actually result in less final product due to excess trim. Improved carcass muscularity will increase the percent retail product of a carcass. For example, dairy type animals will have decreased product amount compared to beef type animals. However, it is important to note that carcass fat has a greater impact on decreasing final product amount than muscle has on increasing retail product. Cutting directions will also impact the amount of product from a carcass. If more boneless cuts are selected, the weight of retail product will decrease. Trimming of retail cuts leads to decreased yield as well as decreased fat in ground beef. Aging also impacts yield. While aging is desirable to improve tenderness and increase beef flavor, longer aging periods result in increased moisture loss from the carcass. In addition, increased dry-aging results in increased dehydration of the surface of the carcass, which can lead to dry, leathery areas that need to be trimmed off. Loss from longer aging is increased in carcasses with little external fat.

Specific factors impacting retail yield:
Carcass fat: External fat over ¼-inch thick is trimmed from retail cuts. This trimming is one of the greatest losses in weight from the carcass and results in a lower percent of retail cuts from the carcass.
Muscularity: The more muscular a carcass, the greater the retail cut yield.
Bone-in verses boneless cuts: Boneless cuts will result in lower total weight of retail cuts.
Ground beef type: A leaner ground beef will have less fat and, therefore, a lower final yield weight and less take-home product.
Carcass abnormalities: Carcass abnormalities include bruising and abscesses. They are removed from, resulting in lower total poundage of retail cuts.
Aging: While aging improves tenderness, it has a negative effect on total yield. The longer meat is aged, the greater the carcass weight loss. The loss occurs for two reasons. First, carcass dehydration removes water weight. Second, if the meat is dehydrated for an extended period, the dehydrated, dry areas are removed, which reduces the yield.

Example Retail Yield
Tables 1 and 2 give a thorough example of the amount of meat and cut options that can be expected from the 1,200-pound steer described here:
If you purchase a 1,200-pound steer with a dressing percent of 63, expect a hot carcass weight of 756 pounds. After the carcass is chilled, assuming a 4 percent cooler shrinkage, it will have a weight of about 726 pounds. If mostly boneless cuts are selected, another 30–40 percent will be lost as fat trim and bone. This puts you at approximately 470 pounds of beef that will be put into the freezer.
A general rule of thumb is that the take-home weight of packaged beef will be approximately 40 percent of the animal’s live weight, or 75 percent of the hot carcass weight.
Note that these are only estimates. Actual values vary based on the type of animal, fabrication choices, and so forth, as mentioned previously. 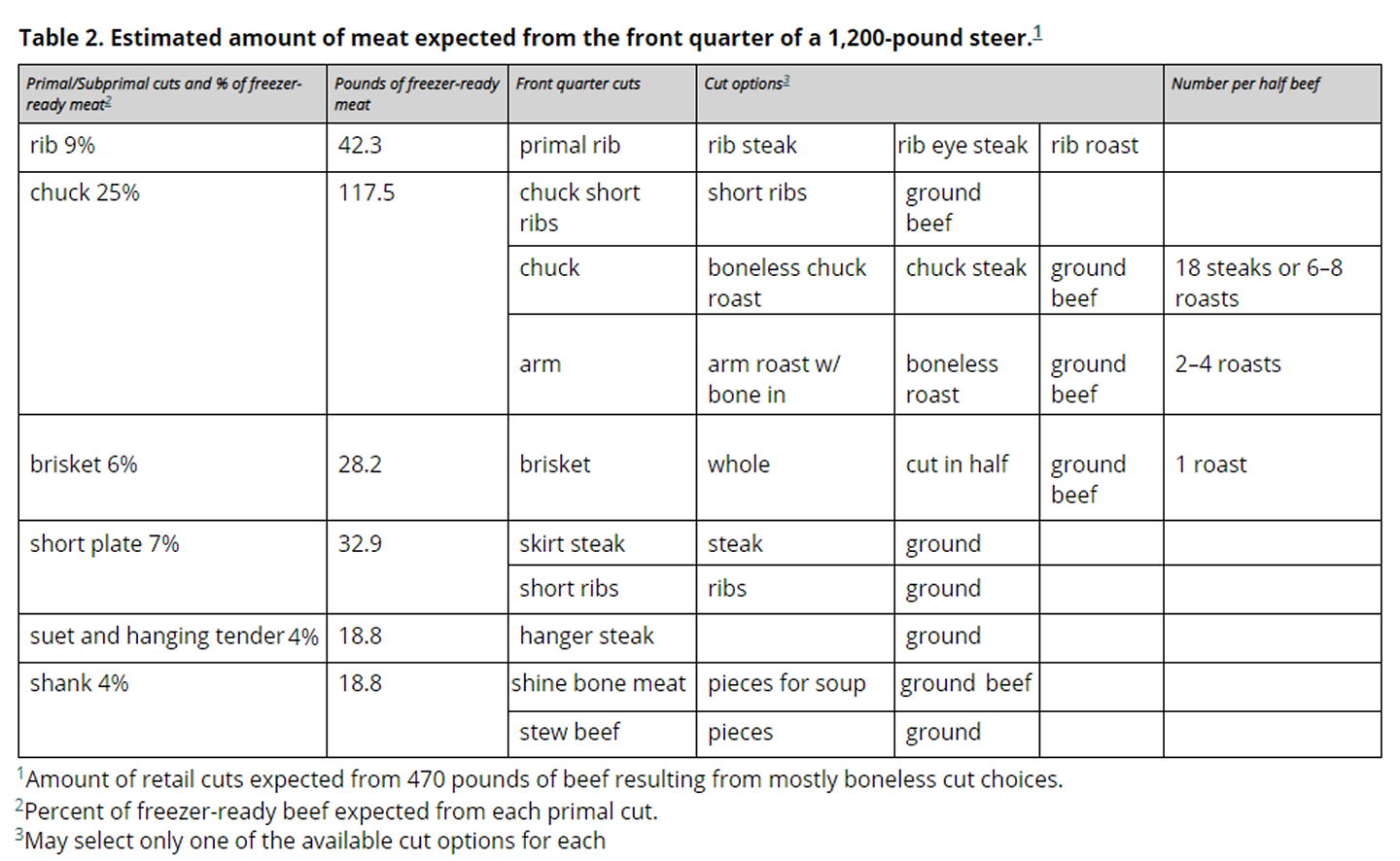